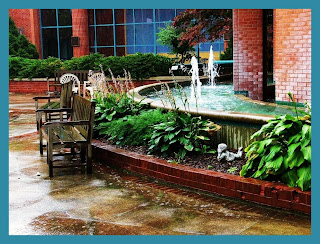 How it clatters along the roofs,
Like the tramp of hoofs
How it gushes and struggles out
From the throat of the overflowing spout!

Across the window-pane
It pours and pours;
And swift and wide,
With a muddy tide,
Like a river down the gutter roars
The rain, the welcome rain!

The sick man from his chamber looks
At the twisted brooks;
He can feel the cool
Breath of each little pool;
His fevered brain
Grows calm again,
And he breathes a blessing on the rain.

Near at hand,
From under the sheltering trees,
The farmer sees
His pastures, and his fields of grain,
As they bend their tops
To the numberless beating drops
Of the incessant rain.
He counts it as no sin
That he sees therein
Only his own thrift and gain.

These, and far more than these,
The Poet sees!
He can behold
Aquarius old
Walking the fenceless fields of air;
And from each ample fold
Of the clouds about him rolled
Scattering everywhere
The showery rain,
As the farmer scatters his grain.

Those of us who got rain yesterday cannot help but celebrate its long awaited arrival during this hot, dry summer. (see Cathy's post) We received about 30 mm of light, steady rain yesterday over several hours (just over an inch) and it was most welcomed by our local farmers who have almost drained their irrigation ponds over the past weeks. In June and July, 77 mm of rain fell at our local airport, which is less than half of normal. Much of it was in the form of scattered thunderstorms, with short, heavy rainfalls and an uneven distribution in the region. Today it remains hot and humid with a tropical jungle feel to the atmosphere.
I was talking to my mother last evening. She was visiting our daughter in the northern part of Mexico where it is very desert-like and dusty most of the time. They have had an exceptional amount of rain and she told me the water was knee deep in some parts of the city. Of course the hard ground there does not absorb rainfall readily. When I was there last year, I didn't see a drop of water in any of the river beds and wadis.
I stood in the hospital courtyard yesterday and took the picture above, not minding the rain falling on my bare head and arms. If I were a child, I would have had an excuse to jump in the puddles and get thoroughly soaked. I like the (abridged) poem by Longfellow which reminds us that seasons of drought do come and that rain in summer can be a most welcome event.
Posted by Ruth at 7:24 am

Email ThisBlogThis!Share to TwitterShare to FacebookShare to Pinterest
Labels: Poetry