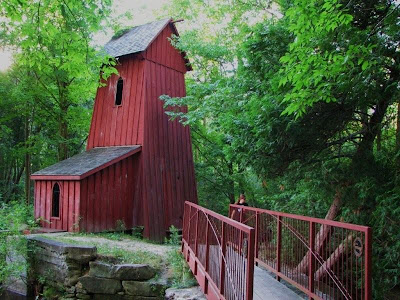 A while ago I watched an interview with Ron Brown, the author of a book called Top 100 Unusual Things to see in Ontario. It was intriguing to think there were so many sites off the regular tourist track. I am always interested in learning more about my area, so I bought the book. I have seen a few of the featured places including the Pioneer Tower that stands on a high bluff along the Grand River just downstream from my workplace. This tower was completed in 1926 to celebrate the German origins of the region, particularly the Pennsylvania Dutch and Mennonite settlers who settled here in the early 1800's. The city of Berlin, Ontario had its name changed to Kitchener during WW1, and this tower was built to help heal nationalistic wounds. The architecture is Swiss in influence, as Switzerland is the ancestral home of a number of Mennonite families in the area. 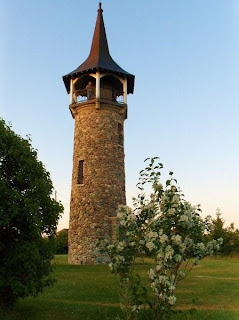 But I had never heard of the other local landmark apparently located just about 10 minutes from my house. The first evening I went looking for it, I was unsuccessful in finding it as the trees hid it from view along the country road. The Sheave Tower is in a small historic village just outside the city. This is the area where my husband's ancestors settled when they came to Ontario from Pennsylvania over 200 years ago. Here is a description of the Sheave Tower from a local artist's web site.

Built by Allan Bowman in 1876, the Sheave Tower, 31 feet tall, was considered to be the oldest hydro-generating system in Ontario. The board-and-batten structure with pointed gothic windows is located in a stand of cedar, bass and maple trees on Old Mill Road outside the Village of Blair, Ontario. The late Nick Hill, an heritage architect, described the Sheave Tower as “absolutely magical . . . a jewel in the midst of a beautiful wetland.” Water from Blair Creek ran through the sluice and turned a vertical turbine shaped like a corkscrew. A series of shafts and gears spun a giant pulley mounted high outside the tower by the steep-pitched roof. A long cable was looped from the tower’s pulley to another pulley 70 metres away at the Blair Mill. The Sheave Tower produced an additional 15 horsepower for the Blair Mill, which once ground corn for Schneider’s pea meal bacon. Heritage Cambridge restored the Sheave Tower in 1999 as a passive display without moving mechanical parts, and returned the medieval-looking tower to its original oxblood colour. Marriage proposals have been made within its walls! Fishermen, artists and photographers continue to be drawn to it.

The old mill across the road is still in operation to this day, and the creek rushes by the restored but silent sheave tower on its way to the nearby Grand River. 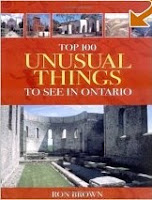 I have marked a few more places from the book that are within a couple of hours from home and will try to visit them soon. Some are historic sites and others are of geological interest.

Do you live near any landmarks that are unique to your area. What would you contribute to a book about unusual things in your "backyard'?