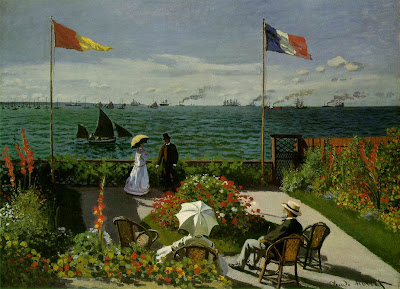 It is a common sight around here to see a small wooden hut at the end of an Old Order Mennonite farm lane with fresh fruit and vegetables for sale. Sometimes there is just a pail of flowers and no attendant, requiring the purchaser to go up to the house to pay. In the last couple of weeks, gladiolus has been the most common flower available. 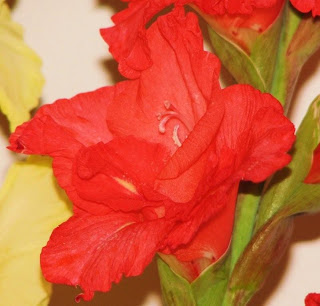 These stiff, formal flowers are often associated with funeral arrangements. I planted them one year and found they were too heavy for their stalks and had to be staked. In our climate, the corms must be removed from the ground in the fall and hung to dry. I don't bother with them now in my garden.

Almost all gladioli are native to sub-Sahara Africa. They were introduced to gardens in Europe and North America in the early 1800's. Claude Monet was apparently fond of them and featured them in the above painting. 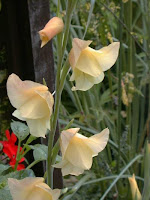 One variety, gladiolus primulinus, was discovered in 1890 on the banks of Victoria Falls, in what was then Rhodesia. The upper petal was hooded in order to keep the pollen bearing stamens dry in the mist from the waterfall. It became known as the Maid of the Mist and is available from mail order nurseries. The picture on the left of this flower is from a website called The African Garden.


Gladiolus is the representative flower for the month of August. I bought three stalks last weekend and have enjoyed the small arrangement all week. They have been cut shorter each day as the lower flowers wither on the stem. Today is the last day of August, and they will be ready for the compost heap by tomorrow. It is hard to believe September is almost here. Schools open next week in Canada and summer comes to an abrupt end. The gladiolus is our last summer garden flower.

Hope every one has a safe and enjoyable long weekend! 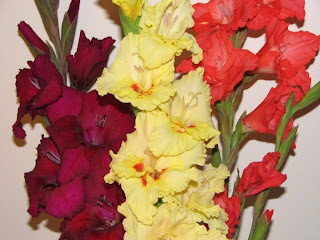